When we check our vps server, we get this ‘swap space or partition is low’ warning in the vps control panel :

The core error is :

You have allocated a small SWAP space for the server, now it’s too low to serve your workloads on the server. You should extend your SWAP space NOW!!!

STEP 1: create a swap file to be used as SWAP partition

You can do as follows:

The above command would create a swap file named /mnt/swap with 1G size, and the parameter “bs” specifies the block size for the both the input and output file.

What is dd command in liunx?

dd is a command-line utility for Unix and Unix-like operating systems whose primary purpose is to convert and copy files.

And we use /dev/zero because:

You can get more information about dd command on this site.

We can set the above file as linux SWAP space as follows:

mkswap sets up a Linux swap area on a device or in a file.

STEP 3: Turn on the swap space

We can turn on the swap space as follows:

There should be a swap line in the output of this command.

You can see that the swap space is 1G , just the same as what we specified in the above commands.

If you want to have the same settings even if the server restarts, you can add this line to the bottom of the /etc/fstab file:

Your Linux system’s filesystem table, aka fstab, is a configuration table designed to ease the burden of mounting and unmounting file systems to a machine. It is a set of rules used to control how different filesystems are treated each time they are introduced to a system. Consider USB drives, for example. Today, we are so used to the plug and play nature of our favorite external drives that we may completely forget that operations are going on behind the scenes to mount the drive and read/write data.

There are 6 columns of each line:

The table itself is a 6 column structure, where each column designates a specific parameter and must be set up in the correct order. The columns of the table are as follows from left to right:

We can set the threshold of the swapping to control when the system should use the swap space as follows:

Open your /etc/sysctl.conf file and add this line:

The default value of vm.swappiness is 60 and represents the percentage of the free memory before activating swap. The lower the value, the less swapping is used and the more memory pages are kept in physical memory.

Changing the value directly influences the performance of the Linux system. These values are defined:

* 0: swap is disable * 1: minimum amount of swapping without disabling it entirely * 10: recommended value to improve performance when sufficient memory exists in a system * 100: aggressive swapping

Now we can goto the control panel of our server again, we get this: 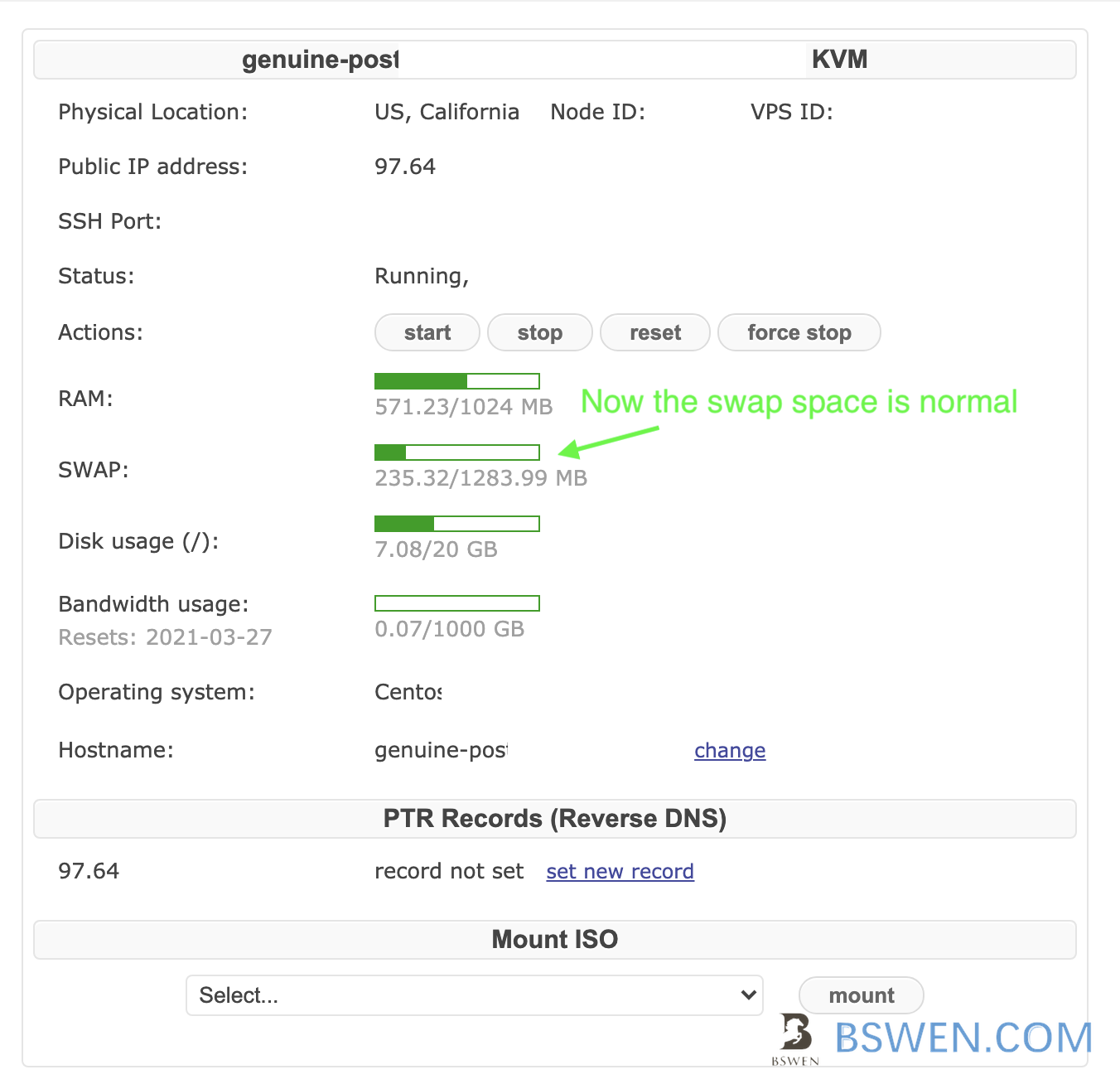 If you encounter this error:

Just use bigger swap size to create your swap file.